‘A modern woman for a modern time’

ALSCT reimagines ‘Beauty and the Beast’

While some may think of “Beauty and the Beast” as a saccharine Disney production, for local theater director Dave Grout, the musical is a timely tale of a young woman standing up to a male aggressor and carving out her own path in life. 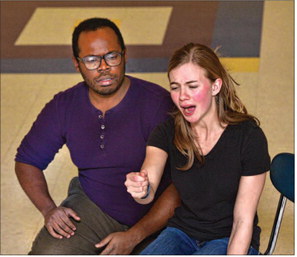 Jayson Paul, who plays the beast, and Rebecca Flinker, who plays Belle, rehearse for Amherst Leisure Services Community Theater’s production of “Beauty and the Beast” at Amherst Regional High School. The show opens on Jan. 11.

Beast.”) “The musical couldn’t be more in tune with current events,” said Grout, who is directing the ALSCT production this year. “The high-profile sexual-assault allegations that have been in the news lately, the #metoo campaign . . . women are finally using the voice they have silenced for so long. If Belle were a woman today, she would not be silent. She would stand up for herself and others and her Twitter would say #metoo.”

It is a vision that is shared by the musical’s lead actress, Rebecca Flinker of Northampton, who is performing as Belle in her third show with ALSCT.

“I tried out specifically for this part,” the 27-year-old said. “It’s something I have wanted to do since I was tiny. And Dave and I shared the vision of Belle as less of a girly girl than she is sometimes portrayed. I didn’t want her to be a typical Disney princess, but a strong, thoughtful and selfdetermined individual.”

To help develop that take on Belle, Grout encouraged Flinker to forget about the Disney portrayal of the character and think about her own experiences as a young woman in the world.

“Most of my focus for adapting this production was on the character of Belle,” he said. “Belle is generally thought of as a generic Disney princess. We always see her in that yellow ball gown. But this is not who Belle is. She is not a passive observer of the events around her. We work hard to show that all the choices Belle makes in this show are because of her decision, and what she wants. We play her as a modern woman for a modern time.”

To reinforce a more contemporary feminist approach to the character, Grout directed Flinker to be bold in her rejections of the aggressive, unwanted suitor, Gaston, who is played by AJ Berube, also 27, of Easthampton. He urged her not to be polite in turning Gaston down, an attitude that was expected of young women at that time.

“Belle in our show responds to Gaston’s advances the way we would expect our daughters to react in such a situation,” Grout said.

Flinker said she “tried to really dive into what that looks like and why,” and explore the ways that Belle grows up over the course of the story.

For Berube, the opportunity to portray Gaston as less of an oaf, and more of a nuanced and complicated character, was appealing. Berube said Gaston is often depicted as goofy, the beefy guy who throws people around and slaps them on the back, but in this production, he had to tap into the character’s deepseated anger. “I played Gaston with another theater group, but was very excited to tackle the role from a different perspective,” Berube said. “I loved the direction that Dave was taking with this character, that Gaston is the actual beast in the end and Jayson’s character as the beast transforms into the prince he actually is.”

“In reality, Gaston is one bad dude,” Grout said. “He is the real beast in this show. Just as we are able to see the good person inside the beast’s exterior, we will see the beast within Gaston come out.”

For Jayson Paul, 25, who moved to Amherst from Trinidad and Tobago to study physics and philosophy at Amherst College, the role of the beast drew him to audition for the musical. Paul, now a second-year admissions counselor at Amherst, previously performed in college theater productions and as Shrek in last year’s ALSCT show, “Shrek, The Musical.”

“I auditioned for this part specifically because I thought it would be cool,” Paul said. “I am a singer and the beast role offered a unique challenge in terms of acting and singing and transformation. And I get to be a monster again, which is extra cool, and to work with this great company again.”

“Flinker’s chemistry with Jayson Paul as the beast is so remarkable ... Belle only has one or two scenes to fall in love with the beast. These two suck you in and play it so real that you buy in. As absurd as the story concept of ‘Beauty and the Beast’ is, they make you believe.”

Paul, who portrays the beast, noted that “Beauty and the Beast” was the first Disney musical to make it to Broadway, and interest in the show was revived with last year’s live-action film starring Emma Watson. What makes the ALSCT production even more compelling is the opportunity to see local actors take on big iconic roles.

“The idea that people you run into at the Big Y are playing all these different, complicated characters draws people in,” Paul said. “It reflects the community itself and with a story as good and as deep and as meaningful as ‘Beauty and the Beast,’ it makes the experience even more special.”

To purchase tickets to “Beauty and the Beast,” visit the ALSCT website at alsct.org. 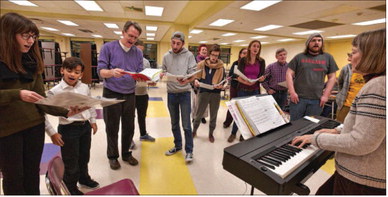 Cindy Naughton, right, who is the musical director for Amherst Leisure Services Community Theater's production of “Beauty and the Beast,” leads a group during a rehearsal at Amherst Regional High School. The show opens on Jan. 11.