NORTHAMPTON – Anne Griffin has been dreaming of a solar-powered personal light for about 15 years, a decade before she founded her company Charge Ahead LLC. Yet, if her Kickstarter fundraising campaign is successful, this dream will become a reality for thousands of people.

Griffin calls her product the Solar Foldy, and it is both a solar-powered LED light and a charger that can be used to charge cellphones, tablets and similar devices.

“It’ll do the whole room for you,” she said, of the solar foldy’s capacity. “You could do surgery by this.”

One of the inspirations for the Solar Foldy was a storm when her children were younger, which was expected to cut off power to her Florence home.

“I’m thinking with my two little kids, ‘Why don’t I have this product already?’” Griffin said.

She described Mingus as a great thinker, whose “mind is like the Louvre Museum.”

There are other products like the Solar Foldy currently on the market, with Griffin saying WakaWaka would be her chief competitor if she is successful in bringing the product to market. However, Griffin said that what sets her creation apart are its superior ergonomics. The device is bigger than a smartphone but smaller than a tablet.

“Mine is less bulky,” she said. “It’s really nice in your pocket.”

While Solar Foldy started off as purely a light, she was told by her mentor at SCORE, a nonprofit organization that provides mentoring advice to small businesses, that the Solar Foldy should also have the ability to charge devices. This set off a four-year odyssey of working with electrical engineers to incorporate the charging function into the Solar Foldy.

Griffin said that the Solar Foldy has utility for business travelers, campers and caregivers. However, she spoke passionately about potential of the device helping in humanitarian ways, especially for use in areas that have lost power. She also said that she would love to work with FEMA, and have her product be handed out in disaster relief packets.

Griffin noted how when she visited her daughter in Detroit and there was a power outage, she had the opportunity to use the Solar Foldy.

“It worked great,” she said.

Charge Ahead LLC was founded in 2013 by Griffin, who doesn’t have a design or engineering background.

“This is just completely something that got stuck in my head,” she said.

However, she did work for more than a decade as a paralegal, and she employed a law firm to establish contracts with consultants.

Griffin is a graduate of Smith College, but she left the area to move to New York City in 1983. She returned to the Pioneer Valley in 1991, moving to Florence with her then husband to start a family. 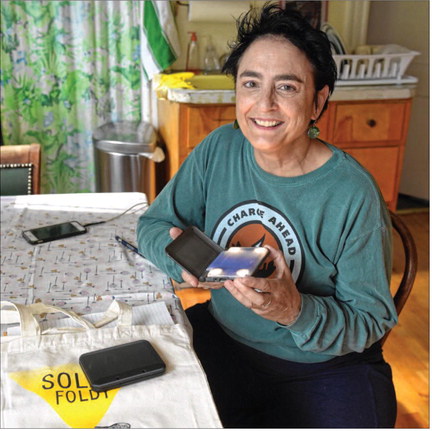 Anne Griffin, owner of Charge Ahead, holds her Solar Foldy, which is a solar-powered light that doubles as a charger for cellphones, tablets and similar devices. Below a closeup look at the device. 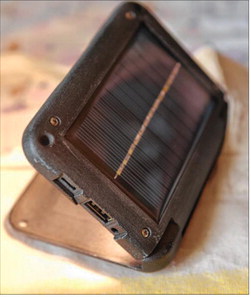 Griffin’s day job is working as the registrar for a photography collection in New York City..

Griffin said that she hesitated to do a Kickstarter for a long time, but that she kept getting encouragement to try the crowdfunding platform. Another thing that spurred the Kickstarter’s launch was that her trademark is set to expire in November if she didn’t use it in commerce.

“And I want to use this logo because I think it’s pretty cool,” she said.

While Charge Ahead has yet to sell a Solar Foldy, people who donate $79 to the Kickstarter will get one. The fundraiser also gives people who need but can’t afford them the ability to purchase the devices.

Should this happen, Griffin said that she will continue to work with her design and electrical engineer and lean into her efforts to get more investors.

At the moment, Griffin has not yet selected a manufacturer for the Solar Foldy.

“I have quotes, but I want to do better,” said Griffin.

Griffin also expressed a desire to make the units in the United States.

“I’d like to do as much as we can here in the States,” she said, although she said that she may have to get parts elsewhere and that Mexico is also a possibility for manufacturing.