NORTHAMPTON — Private attorneys hired to defend the state’s poorest people are set to get back pay after Gov. Charlie Baker signed an emergency bill Tuesday allocating more than $26 million to cover a deficit that bar advocates say is a perennial burden, particularly for those living paycheck to paycheck.

Many attorneys who work as bar advocates — private lawyers who play a role similar to public defenders — went without pay for weeks at the end of the fiscal year June 30 as state funds ran out in the Committee for Public Counsel Services budget that covers the legal work.

“I think even more than just the financial hardship that it creates, you feel underappreciated,” Northampton attorney Lisa Lippiello said. “You work so hard and you don’t get paid enough given the overhead costs and expenses and law school loans and malpractice insurance. When it hap-

pens, you just start questioning, ‘what am I doing this for?’” Lipiello, who formerly worked as a public defender, has worked as a bar advocate for seven years. She said the desire to help people outweighs the other things she has to deal with as a bar advocate. Even so, getting paid late creates problems. The biggest is attorneys not being able to pay their own bills on time, which can trigger late fees.

More than $25.5 million in the bill approved this week will go toward paying private attorneys for work they completed before June 30 that has gone unpaid. Approximately $618,000 will be used to cover court costs and fees for indigent persons.

Working as a bar advocate, attorneys bill $53 an hour for district court cases and $60 for superior court cases and serious felonies. Bar advocates cannot bill for more than 1,650 hours a year. It is up to attorneys whether they bill monthly or when a case closes.

Statewide, about 3,000 attorneys serve as bar advocates to supplement the state’s public defenders. In Hampshire County, Northampton attorney John Drake said the bar advocate list has about 45 names on it, although about 25 are active day-to-day. Bar advocates work as independent contractors for the state.

“I think to be a bar advocate, you are not in it for the money,” said Drake, who has worked as an attorney since 1980 and a bar advocate since 1982. He serves as the supervisor for the Hampshire County Bar Advocate program.

“You are in it for a commitment to criminal defense,” he said. “I don’t want to sound grandiose, but a commitment to justice. We have to do this to make the whole system work.”

For fiscal 2017, which ended June 30, Baker’s budget recommendation put aside about $123.9 million to fund private counsel compensation within the overall Committee for Public Counsel Services budget. By the time it was passed, the state House and Senate cut that amount to approximately $98.9 million.

In February 2017, half of Baker’s $53 million supplemental budget for bar advocates passed, yielding about $27.4 million. The remaining half was approved Tuesday, freeing the additional funds.

Since fiscal 2013, the state has routinely level-funded the private counsel compensation budget line item at around $98 million despite the need to return yearly with supplemental budgets to pay the full costs of bar advocates’ work.

In the current battle over the fiscal 2018 budget, Baker’s proposed $144.8 million for bar advocate pay has been slashed; the compromise bill finalized last week level-funds the line item another year, keeping it at $98 million.

“It’s kind of a perennial issue,” said state Rep. Stephen Kulik, D-Worthington. Kulik serves as the vice chairman for both the joint and House committees on ways and means.

“It’s hard to come up with a budget that will cover all the anticipated spending during the year,” Kulik said. “It really depends on how many cases there are, how much work they are doing and billing.”

Kulik said the Committee for Public Counsel Services wasn’t alone in its budget problems. Other accounts that fund county sheriff departments and winter snow removal are also hard to predict.

“What we always try to do is start with a good baseline and anticipate some point during the year, we may well have to provide some supplemental funding,” he said.

Kulik said there is no question that it can be difficult for bar advocates when payments lag. “And we understand that,” Kulik said. “We have addressed that in the new budget.”

The Legislature has created a $104 million reserve account under the control of the executive branch’s secretary of administration and finance. The account is to cover shortfalls for things like Committee for Public Counsel Services so the secretary of administration and finance can pay bills without interruption and avoid the delay of having to wait for a special supplemental budget, Kulik said.

“We have every hope that will avoid circumstance like we have with CPCS attorneys going unpaid,” he said.

When asked why the Legislature doesn’t budget a higher figure than the historically inadequate $98 million it has appropriated annually since fiscal 2013, Kulik said legislators can’t assume that spending will exceed budget.

“The pattern certainly has been that it does,” he acknowledged. “We hope that $172.7 million will be enough, but it well may not be based on history. That is why we created this reserve fund and why we’ve done supplemental budgets in the past.”

Both Lippiello and Drake have private practices and say they don’t rely on bar advocate cases as their only source of income. Even so, not getting paid on time is an issue.

“I don’t need the bar advocate work to be able to survive but if we are going to make the effort and do this and agree to be paid such a minimal rate… I think the least they could do would be to show us they appreciate that and pay us on time,” Lippiello said.

Tight budgets nearing the end of the fiscal year aren’t anything new. Even though Lippiello and Drake say they bill monthly instead of at the close of the case, there isn’t much more they can control.

“If there was something else I could do, I would do it. Other than spending hours every month billing, to get paid intermittently ... I haven’t found another solution,” Lippiello said. “Saving money, that is great if you can do that. Living in Northampton, raising two kids as a single mom, I’m not able to do that.”

For attorneys who don’t have established private practices, going without pay can create a real hardship.

Without bar advocates, Drake said the whole system would fall apart as the full-time public defenders couldn’t possibly handle everything.

“The Massachusetts constitution requires counsel for a criminal defendant who is facing the possibility of a jail sentence,” he said. “If you didn’t have bar advocates, they (defendants) would be representing themselves because they wouldn’t be able to hire an attor ney.

“So they would be representing themselves which is unconstitutional, which is illegal and therefore the courts would not be able to proceed with the case and the whole system would grind to a halt,” he said.

Emily Cutts can be reached at ecutts@gazettnet.com.

I think even more than just the financial hardship that it creates, you feel underappreciated.” 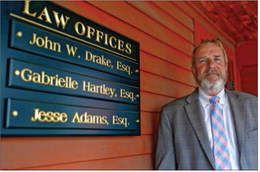