NORTHAMPTON — In one second- grade classroom at Jackson Street School, very few students were sitting behind desks Wednesday morning. Instead, kids were sitting in groups of threes and fours on the floor around various board games, like “Sorry!” Nearby, another group was creating origami with brightly colored paper.

“Other days at school, we read and write and we don’t play,” student Sol Loomis said as she took a break from playing the board game “Ticket to Ride.” “But today, we get to play all day, besides the stuff we have to do: specials, recess, outside time.”

Every class in the school spent a significant part of the day in unstructured play as part of Jackson Street’s first year participating in the Global School Play Day.

The day, which boasted 388,000 participants last year, aims to get students to spend most of the day playing without electronics or adult intervention and structure.

“Resist the temptation to organize, discipline, and teach,” the website instructs educators.

Unstructured time can be hard for some kids who need structure, acknowledged Jackson Street School fifth-grade teacher Tom Chang. “That was my main concern in the beginning,” he said. With that concern in mind, he put a general schedule on the whiteboard with times for lunch and recess, and he built some quiet time into the day for students to re-regulate.

The day of play initiative draws from the idea that kids are not given enough opportunities for unstructured playtime compared to previous generations.

That’s the viewpoint held by Peter Gray, a Boston College psychology research professor. His book, “Free to Learn,” outlines why unstructured playtime is crucial for young people, and his TEDx talk explains why it’s on the decline.

He attributes the shift to a variety of factors, such as worries about safety and a growing notion that kids learn best from adults.

“Childhood has turned from a time of freedom to a time of résumébuilding,” he said in his TEDx presentation.

Gray’s TEDx talk resonated with Jackson Street School Principal Gwen Agna. She pointed to increasing economic pressures on families and more state testing in schools as potential reasons for the decline in play.

“For teachers, I think it’s hard to 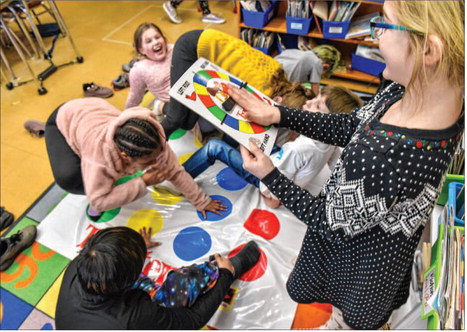 Jackson Street School third-grader Keira Stokes-Buckles, right, calls the moves for Millicent Wolf, top left, and other classmates in a game of Twister during a “Global School Play Day” observed at the Northampton elementary school on Wednesday. Below, fourth-grader Malia Silver ponders her next question for a clue in a game of “Guess Who?” with a classmate 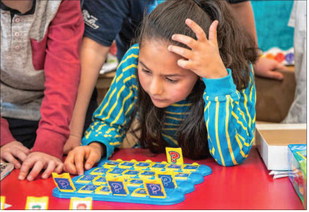 imagine having a day of play,” she said.

As she spoke, a single-file line of students walked through the nearby hallway, and Agna asked how the day was going for them.

“We should do this every week,” one student responded, flashing a thumbsup as the group passed by.

Talia Cossin, a secondgrade teacher, said a lot of kids’ time is “highly structured” by grownups.

“I think it’s a good opportunity for kids to spent time in the classroom in a way they aren’t used to and develop skills not always focused on during the school day,” she said.

Fifth-grade students Merrick Hagan and Elliot Rounds said sometimes they have unstructured time in their lives in and out of school, but it depends on the day. The two students sat at a table in their fifth-grade classroom playing what they called a “really weird” card game.

“We don’t have to do anything,” Hagan said. Rounds agreed.

“I feel like a kindergartner, a preschooler,” said fifthgrader Mya Grant as she looked up from her card game. She saw the day as a break, but her teacher, Tom Chang, sees the students learning.

“They’re learning lots of communication skills, socialemotional skills, self-regulation and how to spend their unstructured time,” he said.

As he sat across a chessboard mid-game with a student, he said, “I would have loved this as a kid.”

Greta Jochem can be reached at gjochem@gazettenet.com 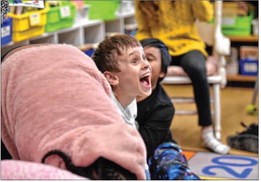 Jackson Street School third-grader Zane Poehler tries to maintain his balance while playing a game of Twister as part of a “Global School Play Day” Wednesday.